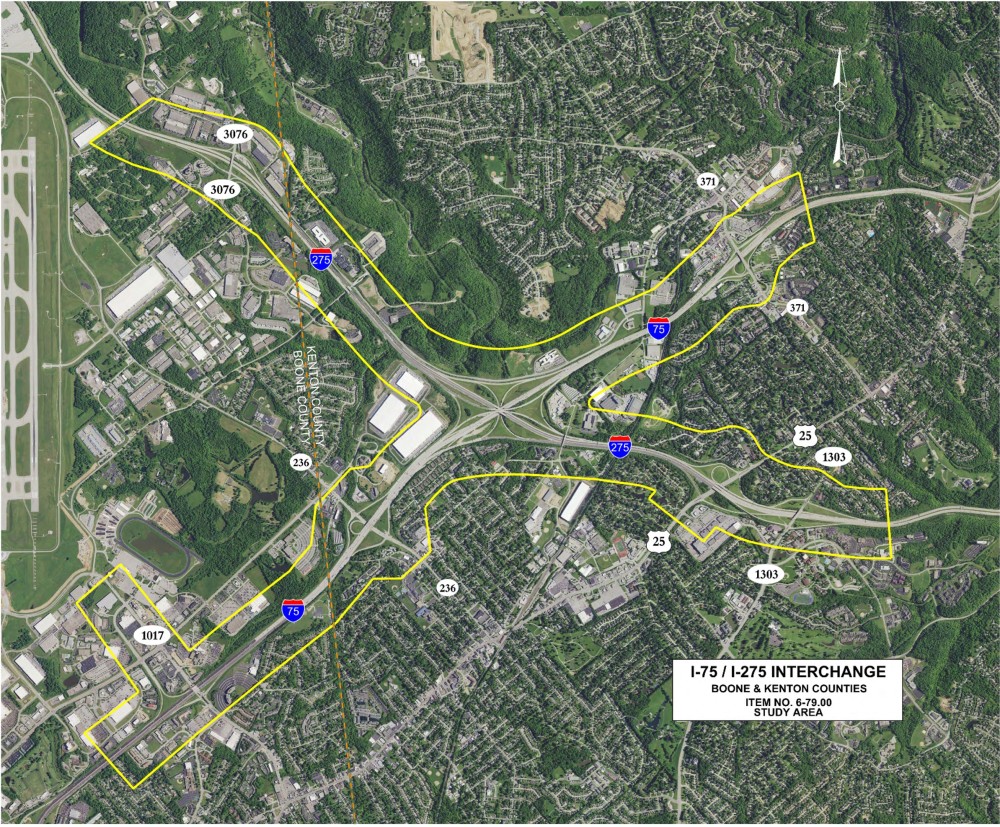 The I-71/75 and I-275 interchange is one of Northern Kentucky's most important transportation links. It connects two major interstate highways (I-71 and I-75) with I-275, and is critically important to the flow of traffic throughout the tri-state region and along one of our nation's primary transportation corridors. Each day, the interchange carries more than twice the number of vehicles it was designed to support, and these traffic volumes are increasing as Northern Kentucky continues to grow. During the past three years, the Kentucky Transportation Cabinet (KYTC) has been studying possible alternatives to reduce congestion and delays around the interchange and make overall travel through the area easier and safer. We’ve focused on ways to improve traffic flow and make it easier to enter and exit the highway system. We’ve also been looking for options that minimize impacts on the areas located in near proximity to the highway and its entry and exit points.Through these efforts, we’ve identified a series of modifications – also known as our Recommended Alternative – that we are now sharing with you through this virtual Open House. These include improvements to the 75/275 interchange itself as well as a number of other nearby interchanges with major local roads and state routes. We invite your review and consideration of each of the proposed improvements. Comments we receive from the public are an important part of our review process, will help us fine-tune the proposed improvements, and determine which ones will ultimately be recommended for construction.Begin by reviewing the first tab below which tells you more about how this virtual Public Open House works. We hope you enjoy this virtual public input experience and look forward to seeing what you have to say.

HOW THIS OPEN HOUSE WORKS

This site is a self-guided tour through a series of tabs highlighting the improvements being considered in and around the I-75/I-275 interchange. Opportunities are provided in each section for you to provide feedback and share your comments.

To advance between tabs, click the CONTINUE button located at the bottom of the page. You can also move between pages by clicking on the tabs located at the top of the discussion section (move the gray progress bar under the tabs to see more tabs).

If you would like to view larger versions of any graphics on a page, and we encourage you to do so, simply click on the image. Copies of project materials are posted under the DOCUMENTS section, located in the column on the right-hand side of the screen (if you are on a mobile device, this may be located at the bottom the page).

If you need printouts of any materials or maps, translation services, or other reasonable accommodations to participate in this virtual Open House, please contact Sharon James, KYTC Environmental Coordinator, at (502) 564-4256 or [email protected].

This virtual Open House will be open 24 hours a day for 30 days. Please submit any questions or comments you may have by February 10, 2023.

Below are materials that provide additional information about the 75/275 Interchange project.

This survey gathered public input regarding experiences when traveling through the interchange area and the challenges encountered. Feedback received was used to help develop and evaluate improvement alternatives.

This study identified and evaluated conceptual alternatives to improve capacity and travel safety in the I-71/75 and I-275 interchange area and reduce traffic delays in the near vicinity.

I-71/75 & Turfway Interchange Area: 2023
Remaining Improvements: To be determined

Prepare construction plans and cost estimates. Right of way needs are authorized during the design phase and utlity relocation needs are identified.

I-71/75 & Turfway Interchange Area: 2027
Remaining Improvements: To be determined